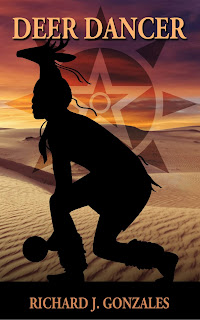 In 1800s Sonora, Mexico, the Yaquis are in constant struggle to keep their homelands from first the Spaniards and later the Mexicans. The battle between Yaquis and the Mexicans is personal for the Falcon family of Mateo, Petra, Luz, Angel and Cheve, as they fight to survive in the dangerous and violent world they live in. Deer Dancer blends both the mystical culture of the indigenous peoples of the Americas and historical events from this dark period in Mexico’s history to fascinate and educate older young adults and adults alike.


RICHARD J. GONZALES wrote for six years about Chicanos as a Fort Worth Star-Telegram weekly guest columnist. He has published short stories in The Americas Review, a Hispanic literary journal of the University of Houston, and has worked in, observed, and researched the Chicano community from the 1970s to the present. Richard has previously published a book of non-fiction, Raza Rising: Chicanos in North Texas, with University of North Texas Press in 2016.  To follow his writing, visit Richard’s website at www.richardjgonzales.com.